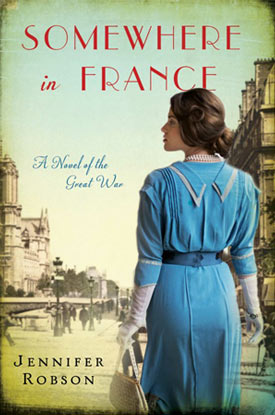 Lady Elizabeth Neville-Ashford wants to travel the world, pursue a career, and marry for love. But in 1914, the stifling restrictions of aristocratic British society and her mother’s rigid expectations forbid Lilly from following her heart. When war breaks out, the spirited young woman seizes her chance for independence. Defying her parents, she moves to London and eventually becomes an ambulance driver in the newly formed Women’s Army Auxiliary Corps – an exciting and treacherous job that takes her close to the Western Front.

Assigned to a field hospital in France, Lilly is reunited with Robert Fraser, her dear brother Edward’s best friend. The handsome Scottish surgeon has always encouraged Lilly’s dreams. She doesn’t care that Robbie grew up in poverty and yearns for their friendly affection to become something more. Lilly is the most beautiful – and forbidden – woman Robbie has ever known. Fearful for her life, he’s determined to keep her safe, even if it means breaking her heart.

In a world divided by class, filled with uncertainty and death, can their hope for love survive. . . or will it become another casualty of this tragic war?

“Robson's first novel examines the dynamic between love and duty in the midst of historical tragedy [...] Robson's skillful ability with detail and setting firmly relates the grotesqueries of war without gratuitous gore. Her deft touch as a storyteller keeps readers engaged in the story of the lovers, as well as illuminating the bigger picture of the war raging around them.”

“Set in the turbulent years of the First World War, Somewhere in France is a heartfelt portrait of love, courage, and self-discovery. Robson deftly weaves a tale richly steeped in the atmosphere, drama and heroism of an evolving and war-torn world. A compelling and memorable read.”

—Lynn Sheene, author of The Last Time I Saw Paris

“Utterly engaging and richly satisfying, Somewhere in France depicts the very best in love and war. Fans of Downton Abbey will devour this novel!””

“Robson’s first novel evocatively captures the feeling of the time as it follows the adventures of independent Lady Elizabeth “Lilly” Neville-Ashford, who in 1914 is expected to adhere to the rigid roles for upper-class British ladies. Instead, Lilly defies her family’s stifling expectations by moving to London, where eventually she joins the Women’s Army Auxiliary Corps and becomes an ambulance driver in a refreshing change of pace from the more usual female occupation of nursing. Strongly on Lilly’s mind is Robert Fraser, a friend of her brother’s and the one man who makes her heart flutter. Despite being a surgeon, Robbie is not from the right class and, therefore, spurned as an appropriate suitor by Lilly’s snobby parents. Yet the two would-be lovers manage to find one another near the battlefields of France. The question remains whether their love will be realized during those tumultuous years. Robson intermingles the overarching themes of love, war, and societal strictures in this appealing read that should resonate with fans of Downton Abbey.”